Results are current as of September 18.

Season Update: Annville-Cleona has a 5-2 record and is 4-1 in Section 3 play.  The team has been led by Maddie Summers and Kaylyn Stokes, a duo that took second in doubles at the Lebanon County Tennis Championships and is currently undefeated in match play.  They are also aided by their #2 singles player, Laney Kreider, who is undefeated in Section 3 action.  With six matches remaining, three of those being Section 3 matchups, the hope is that the Dutchmen can continue to hone their skills and pick up momentum in hopes of creating post-season opportunities.

Season Update: The Cedar Crest Falcons have had mixed results this season, standing at .500 overall and in Section 1 play. At the Lebanon County Tennis Championships, the team tied for first place overall.  The highlight that day came in the form of doubles play, where Talia Thomas and Madeleine Kase finished second in the first  flight, while teammates Claman and Idgunji won the second flight of doubles.  On the individual side, Annie Forry has led the way this season, winning six of her seven matches as the #2 singles option for the Falcons, only losing a close match with an opponent from Hempfield.  With experience gained throughout this season, don’t be surprised if members of the Cedar Crest tennis squad make some noise in the Lancaster-Lebanon League tournament.

Season Update: The Lady Raiders are off to a tremendous 6-2 start to the season.  They are led by seniors Camryn Lehr, winner of the Lebanon County Championship in the #2 singles competition, and Ali Bender, who finished second in #1 singles.  While these two are playing well individually, it may mean more that their play has been critical to giving the team a chance at qualifying for the District 3 Tournament.  ELCO has four matches remaining, each one being very important to punching their ticket to Districts.

Season Update: As mentioned in the Season Outlook, it is not a secret that most kids growing up in Lebanon are not hitting the tennis courts on a regular basis.  It is nearly impossible to have beginner’s luck in the sport of kings (or queens).  With development underway, it has been a rough season when considering the match results that the Cedars have endured.  The hope is that these ladies have learned more about the game and come back stronger next year.

Season Update: Northern Lebanon knew coming into the season that they were going to struggle as a result of inexperience and low numbers.  This has proven to be true to an extent, but there are some silver linings for this Viking squad.  First of all, they are putting up a fight in nearly every match, with seniors Aryana Via and Cora Lerch making large contributions.  The other benefit is that each time this team picks up their rackets, they get  better.  If the younger players realize this, the team will ultimately benefit in future years.

Season Update: As a team, the Palmyra Cougars are currently 6-4 and were co-champions at the Lebanon County Championships.  This is a team that only returned two starters from last year’s team, but that worked hard in the off-season to get better.  Coach Opilo is quick to point out that the ladies have supported one another in this effort.  Joining Marissa Nicholson as the only other returning starter is Nitya Patel, who is 7-3 as the #1 singles player for the Cougars.  Patel also won the Lebanon County Singles Championship and led her team to the co-championship, which earned her LFCU Athlete of the Week Honors. With the team playing well, the hope is that they can finish the season with a winning record and find success at the Mid-Penn Championships (and beyond). 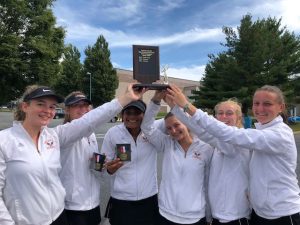