This feature recaps recent action from the youth travel basketball organizations in Lebanon County. Additional reporting beyond the scores is based on information provided by the dedicated volunteers within these organizations.

Insight: Team Blue started out the season with a big win over a local county rival Northern Lebanon, the same team they faced in the championship of the Northern Lebanon Turkey Tip Off.  The Falcons applied full court pressure to win their first game of the season.  The team was led by the scoring of Jaden Truss with 18 points and Griffin Lorenzo with 9 points.

Insight: Team White’s first week of basketball resulted in a record of 1 and 1, with a tough loss to Cocalico and a big win over ELCO White.  In the win, the effort was led by Dante Gray with 10 points and Denny Furmanski with 9 points.

This big season opening win over Manheim Central gives the players something to be excited for going forward.

Insight: Team White has come up just short in their first two games after facing the tough defense from Cocalico and the three-point shooting of Manheim Township White.  Team White has been led by the scoring of Adam Caldron and Joshua Zentner.

North Schuylkill Tournament Recap: Over the past weekend, the Viking 6th grade team completed a 5-0 run at the annual North Schuylkill 6th grade tournament located at the former Cardinal Brennan School, Ashland.  In a pool of 12 teams, NL finished 5-0, beating Minersville, North Schuylkill Red, and Freeland in their pool play.   They battled past a good host North Schuylkill team in the semifinals, 42-38, and beat St. Clair for the championship 35-24.

The team was led in scoring by Christian Rizzo (16 in semifinal and 12 in championship) and Brayden Demler who also scored 12 in the championship.   The Vikings held their opponents to an average of 18 points over the entire weekend, led in defense by Demler, Rizzo, Tyler Hornberger, Nolan Anspach, Trent Walborn, and Dante McFarland.  Hornberger led the team all weekend in rebounds and played tremendous defense on the  opposing team’s post players.   The Vikings resume Lancaster-Lebanon league play this week and will be back in tournament action New Years Eve at Spooky Nook.

The Vikings are coached by John Rizzo and assisted by Jaime Walborn and Rick Hornberger. 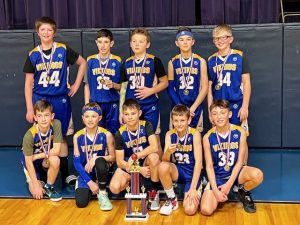 Unlike the previous teams, Palmyra does not compete in the LL Travel League, making the exact results a little tougher to find.

6th grade – Lost by 3 in their most recent match-up.

5th grade – Suffered a loss in their most recent game.