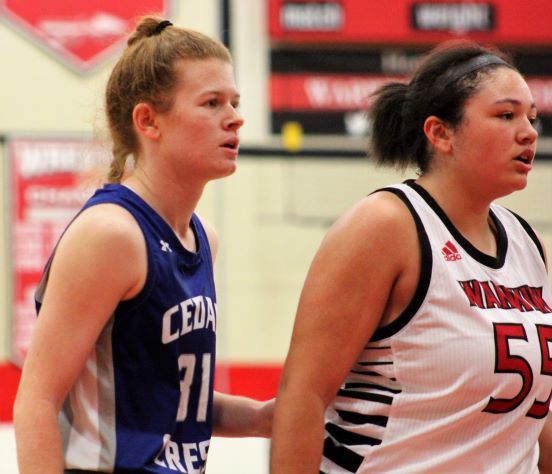 She can score and defend and rebound. She also exhibits high levels of concentration, she makes good decisions and she leads by example.

Lizzie Lowe possesses a well-rounded, all-around court game. And that versatility has translated into consistency for the Cedar Crest girls’ basketball team.

This week, Lowe and the Falcons continued to surprise and impress. Thanks in part to the junior forward’s contributions, Cedar Crest scored three more early-season triumphs.

It all began on Monday at home, when Lowe poured in 18 points during the Falcons’ 50-24 non-victory over Twin Valley. Then on Wednesday in Lititz, Lowe tallied nine points for Cedar Crest, as it recorded a 43-26 road win at Warwick.

Lowe closed out her week at home on Friday, with six points during a 30-23 triumph over Hempfield. That particular contest served as the Falcons’ Lancaster-Lebanon Section One opener.

Currently, Lowe and Cedar Crest stand at 6-1 overall and 1-0 in Section One. That fast start has almost assured that the Falcons will be competing in meaningful games for the rest of the winter season.

LebCo Bowling – Season Outlook
Stay Tuned: Cedars Crafting Tale That Has Everyone on Edge of Their Seats