The #6 seeded Falcon “B” Team lost their quarterfinals matchup with a very tough #3 Ephrata.  Ephrata had a line that dominated the game, making it tough for the Falcons to breakthrough.  However, there were several positive moments in this game for the Falcons, including big performances from Jackson Smith and Steven Reyes.

On Sunday, the Midgets, Mighty Mites, and Mites all traveled to Fleetwood for the BAYFL Championships.

The Panther Midgets squared off in the championship round against the undefeated Muhlenberg Muhls.  There was a reason their record is what it was, as they were able to dominate the game against Myerstown, winning 27-0.

The Panther Mites met Schuylkill Valley in a match-up that would determine which team would finish third in the league.  A nailbiter throughout the game, it was the Panthers that came out on the wrong end of the 13-12 contest.

The Panther Mighty Mites entered the championship game against the Kutztown Cougars as the number one seed in their division.  The game was tight throughout, with solid play from both teams.  Unfortunately, it was Kutztown’s score late in the fourth quarter that was the difference, as they won the BAYFL Mighty Mites Title.

All in all, the coaching staffs within the Myerstown Youth Football program were pleased with how the season turned out, as they had two second place finishes, along with another team playing on championship Sunday.

The Northern Lebanon Peewees, along with Viking Nation traveled to Chambersburg High School to battle the Middletown Blue Raiders.   The winner would earn a trip to the CFA Federal Conference Super Bowl.

To open the game the Raiders and Vikings exchanged defensive stands in the first quarter.  In the second quarter, the Blue Raiders were able to find the end zone on the second play from scrimmage.  With the successful extra point, the Raiders led 7-0. The Vikings responded with a nice drive that ended on the Middletown 15-yard line, but it failed to yield any points.  The Blue Raider offense looked as if it would score again, but the Viking defense stood their ground the halftime score remained 7-0.

Following some halftime adjustments, the Vikings opened the second half with the ball.   For the majority of the third quarter, the Viking offense drove the ball down the field. The Vikings spread the ball around nicely to multiple players on this drive, allowing them to gain several first downs.. Unfortunately, this drive would end with a fumble at the Raider 15-yard line.

Entering the fourth quarter and still trailing, the Vikings dug deeper. After exchanging a couple of possessions with the defense still playing strong, the offense had one more chance. After another balanced drive, the Vikings found themselves at the four-yard line. With 40 seconds remaining, it was Mason Moyer on a quarterback keeper who made the score 7-6.  Unfortunately, Middletown having just given up its first points of the season was determined to stop the Vikings from scoring the extra point.

Down by a single point, the Vikings looked to their special teams to make some magic. Kicker Titus Feagleyplaced the onside kick attempt perfectly just behind the front line towards the sideline allowing gunner Luke Copenhaver to tap the ball to keep it in bounds when Logan Carpenter to recovered it.  This kept hope alive for the resilient Vikings. With 38 seconds remaining, the Vikings were able to run two more plays.  The first play was a long pass that was nearly snagged for the winning score.  With one final attempt left, Middletown’s defense again shone and record a quarterback sack to preserve the win.

This game ended the season for the Viking’s organization, but the coaches and fans were left in awe of the incredible effort by these 8 and 9 year olds.  As part of this effort, and something that kept the game close, is that they did not commit any penalties the entire game.  Viking Nation has much to look forward to next season. 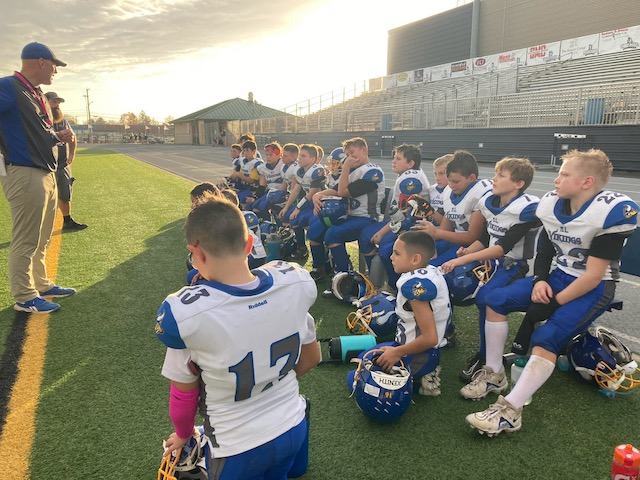 Even with the sun setting on the season, many lessons were learned in the losing effort 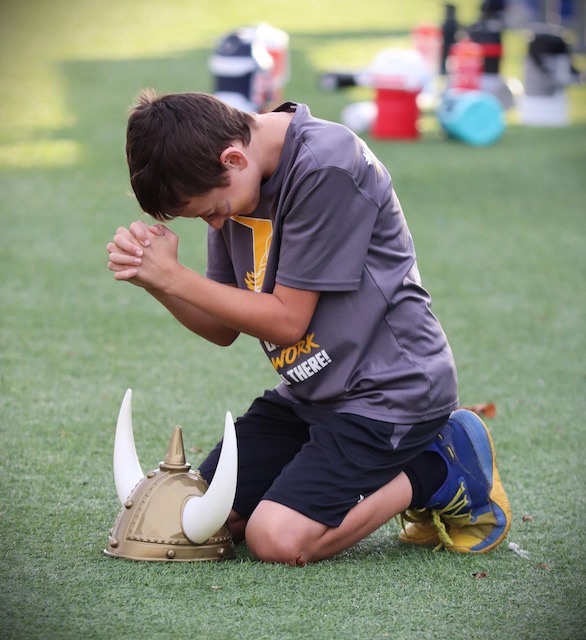 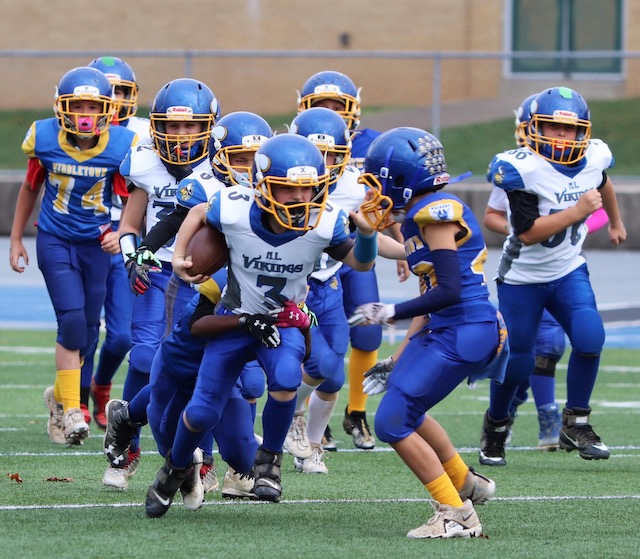 Logan Carpenter dragging a defender as he fights for extra yards 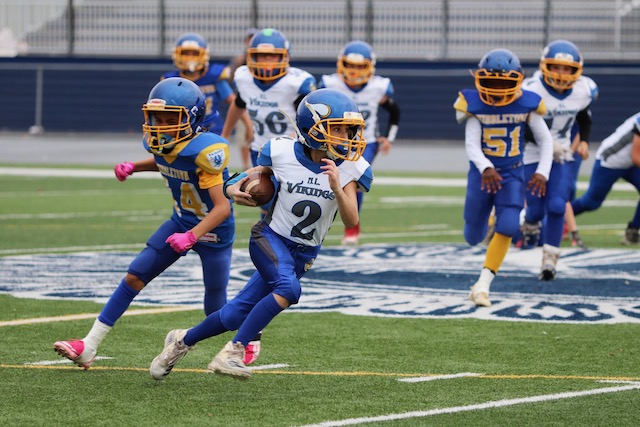 Quarterback Mason Moyer is off and running 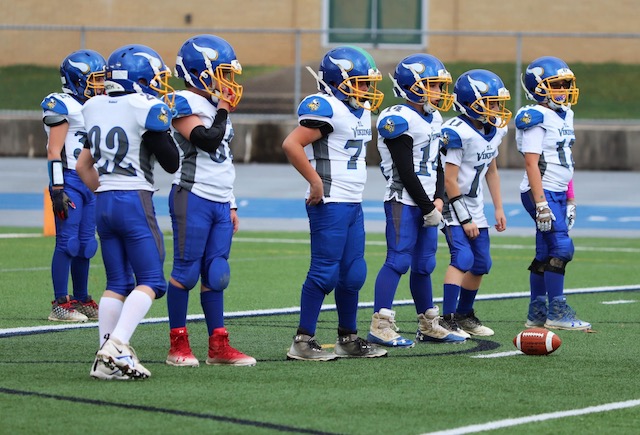 The defensive line that controlled the trenches

The Midget Cougars tested the waters with a few new things. They found out you can’t roller skate in a Buffalo herd and found themselves down by six. After some halftime adjustments, the Cougars roared ahead. They capped the game by stopping Greenwood’s final drive with an interception.  This win punched the 13U team’s ticket to the Super Bowl.

The Pony Cougars gave their everything against the Bulldogs. While they came up short, they proved that can ball. The growth the team earned through their hard work will serve them well next season. The coaching staff will be sure to remind them that they do not want feel left out again.

The Peewee Cougars met a familiar foe with Hershey. They remained scoreless until a defensive scoop resulted in a score that lit the flame for the young Cougar team. After a defensive back and forth, the offense scored again to seal the deal and earned this team a Super Bowl appearance.

Up Next: The Cougars travel to Rocco Ortenzio Stadium on the Bishop McDevitt campus for the Super Bowl this Saturday, November 12th.

The Peewee Cougars go up against the Good Shepherd Rams. The last time they matched up  during week 7, the Cougars blanked the Rams with 20 points.  Look for the claws to come out early to keep the Rams from picking up steam.

The Midget Cougars get a rematch against the Hershey Trojans. When they last played in week 9, the Trojans celebrated around the midfield Paw at the Cougars’ stadium after stunning the 13U squad with 25 unanswered points. Look for the Cougars to take a page from the Roman epic poet Virgil and be ready for a great battle. 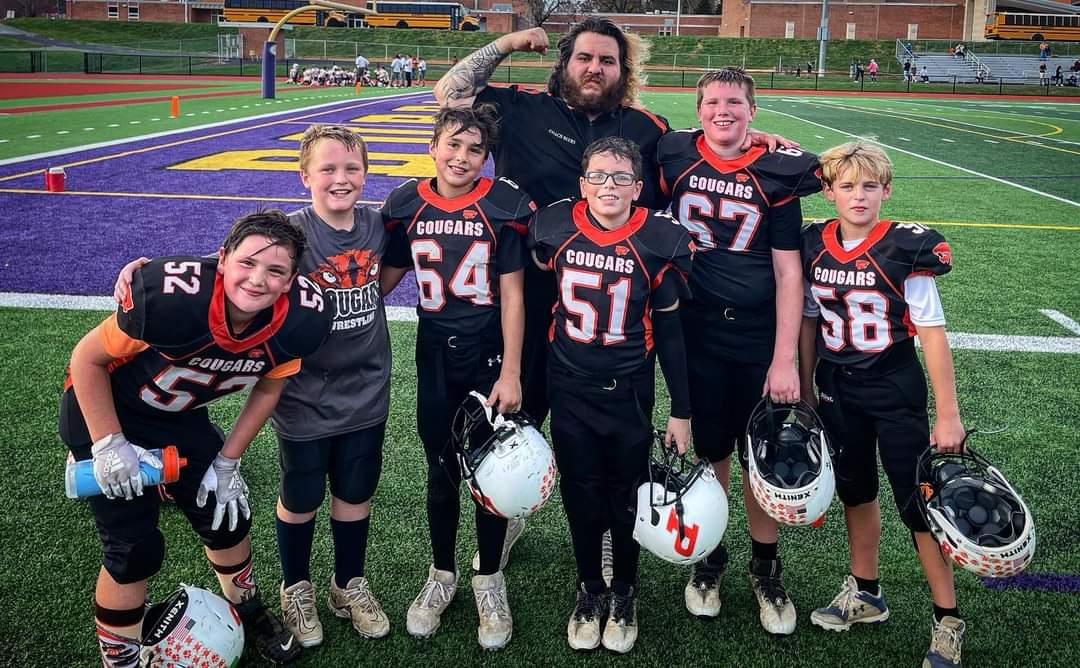