On Sunday evening, Falcon Youth Football played far, far away from home against host Eastern York.  The parents were thrilled with the time of the game on a school night.

In this matchup, the Falcon “B” Team was able to build a lead and play everyone in a total team victory.  They were able to use this game to prepare for their upcoming playoff game.

Even before the game began, everything went in favor of the Falcon “C” Team.  Yes, even the coin toss.  The Falcons deferred, choosing to give the ball to the Knights to begin the game. Justus Padilla delivered the kickoff, but when the Knights attempted to return the pigskin, it was Nate Marley who forced the turnover that gave his team great field position.  The Falcons did not waste this opportunity and were able to cross the goal line. Throughout the game, the offensive line provided an opportunity for quarterback Tate Speraw to make key throws and to use his legs to cause even more issues for Eastern York’s defensive unit. Throughout the game, the Falcons held tough on defense.  When Eastern York finally broke through, Jake Ryan used his speed to return the subsequent kickoff.  Every player left all they had on the field, resulting in this team win to end the season.

The Falcon “D” Team came to play.  So did the young Eastern York squad.  This resulted in an exciting game.  The Falcon’s scoring began when running back Mason Kleinfelter broke a 20-yard run to find the end zone for six points. Cameron Wamsher then hit Luke Helwig with a pass for a successful two-point conversion.  This gave the Falcons an 8-7 lead.  On the next drive, Amarion Padilla scored on a 30-yard run to make the score 14-7.  Late in the game, Eastern York scored on a huge 50-yard run, but failed to convert on the extra point, as their passing attempt fell incomplete.  This game the Falcons a thrilling 14-13 win to end their season.

Up Next: The #6 seeded Falcon “B” Team will play #3 Ephrata in the quarterfinals.  The game will take place at neutral Solanco on Saturday afternoon. 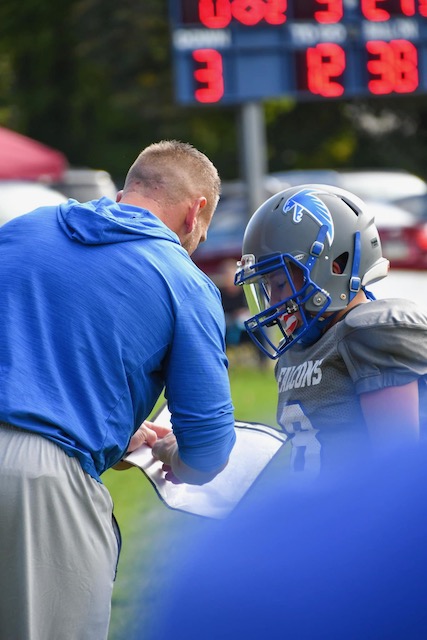 This was the first round of the CFA playoffs, with both the Raider Midgets and Raider Peewees having earned spots.

The Raider Midgets played the Middletown Blue Raiders for the second straight week.  Unfortunately, it did not go as planned and Middletown won again.  However, there were some performances worth mentioning.  Terrell Culler led the way in the ground attack.  Xzavier Baker had a nice reception at the beginning of the game.  On the defensive side of the ball, it was Nelson Richardson leading the team in tackles.

The Raider Peewees had a tough matchup against West Perry. Although the Raiders were the lower seed, they battled hard throughout the game.  Patrick Fields provided a scoring play in the form of a touchdown.  Rayjon Hunter showed off his athletic skill in providing several big tackles for the defense.  When the clock ran out, the Raiders had lost, but they did show that they could have a promising future.

The Raider Smurfs participated in the annual Smurf Bowl.  They played great, even though they did not win. The key to the success of the day is that that they had fun.  Grayson and Jaziel led the offense, with Jaziel also providing a large number of tackles for the defense. 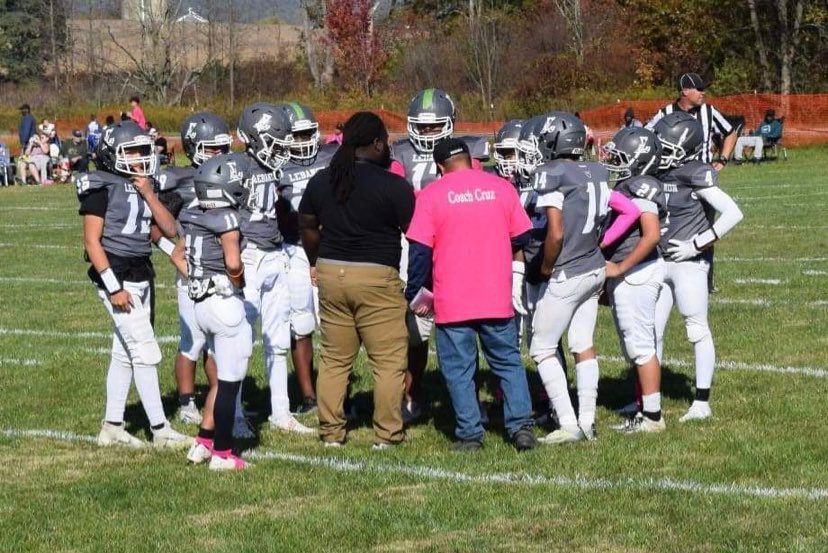 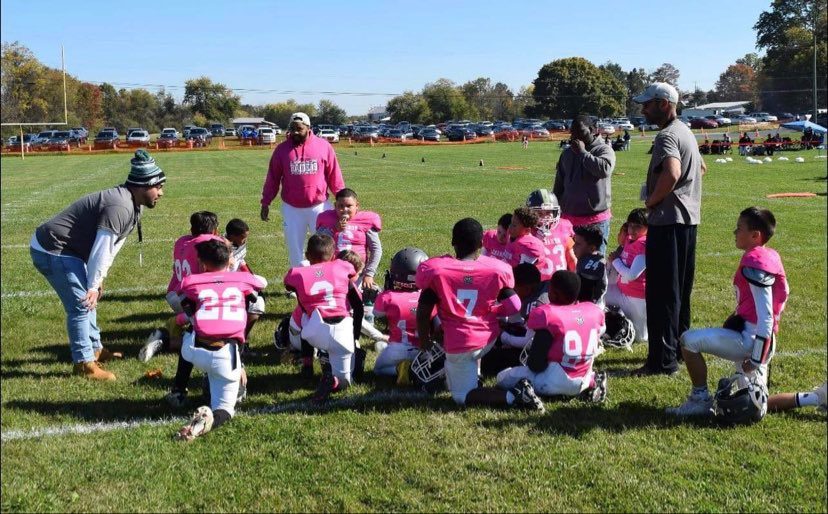 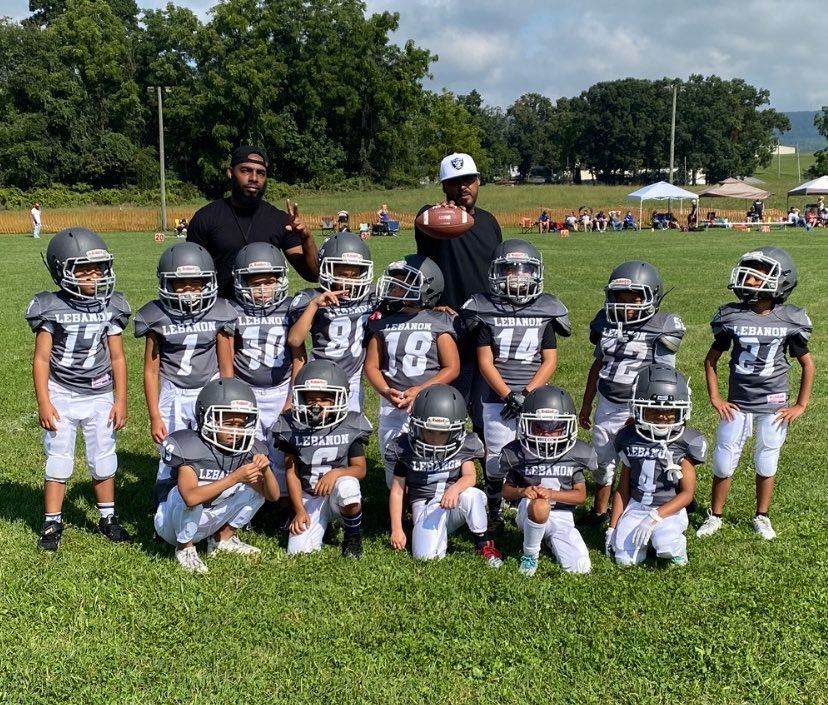 On Sunday, all three tackle teams for the Myerstown Panthers played in the semifinals of the BAYFL.  The games took place at Pequea Valley.

The Panther Midgets drew a Schuylkill Valley team that was very well-prepared.  On the opening possession, it was Schuylkill Valley that took an 8-0 lead over the Panthers.  Myertown responded quickly with a rushing touchdown courtesy of Chandler Gass.  Gavin Yeiser provided a two-point conversation to tie the game.  To start the second half, the Panthers scored again.  Their 14-8 lead held until Schuylkill Valley scored early in the fourth quarter.  They converted on the two-point conversion to take a 16-14 lead, putting the Panthers against the wall.  With 1:50 left it was 4th and 8 yards to go for a first down.  Not buckling to the pressure, quarterback Gavin Yeiser found Chandler Gass for a new set of downs.  This set the table for Caiden Beihm to score on a 16-yard run for a touchdown that would give Myerstown the lead for good.  They will meet Muhlenberg in the BAYFL Championship Game.

Oley Valley proved to be too much for the Panther Mites, who fought to the end.  With this loss, they will play in the third place game this week.

The Panther Mighty Mites were able to beat a very tough Schuylkill Valley unit by a score of 18-7.  This victory means that they will advance to the Championship where they will play Kutztown.

The start of the CFA Playoffs meant that only the Viking Peewees had a game to play.  The game, held at Red Land on Saturday, pitted the #7 Vikings against the #2 Chambersburg Trojans.

For the Viking Peewees, this matchup with Chambersburg was a rematch of a Week 5 game that was won by Chambersburg by a score of 14-0.  Northern Lebanon was clearly the underdog going into the game, but they were poised and ready to pull the upset.  Chambersburg had other ideas when they scored first and held a 7-0 lead at the end of the first quarter.  The Vikings were able to answer mid-way through the second when quarterback Mason Moyer scored on a touchdown run.  Unfortunately, they were unable to convert on the extra point and still trailed by a point.  When Chambersburg attempted to score again before the end of the half, it was Isaiah Stokrp who came up with a huge sack to stop the Chambersburg threat.

Coming out of the halftime break, the Vikings took control of this game.  Linebacker Braiden Harris recovered a fumble, stopping another Trojan drive.  Once on offense, it looked like the Vikings would have to wait again to score, but on a 3rd and 10, Moyer found Coy Crane for a 20-yard gain.  On the very next play, running back Luke Copenhaver reeled off a 24-yard run that was only stopped because he crossed the goal line.  Running back Logan Carpenter provided the extra point to give the Vikings a 13-7 lead.  An excellent team defensive effort shut down the Trojans the rest of the way, preserving the upset.

The Vikings will now meet the #1 seed Middletown Blue Raiders in the semifinals in a bid to earn Northern Lebanon’s spot in the CFA Superbowl.

On Saturday afternoon, the Viking Smurfs traveled to Big Spring participate in the CFA Federal Conference Smurf Bowl. The Smurf Bowl is a competitive tournament and celebration for the league’s youngest players. The games consist of a best of 3 possessions in which each possession begins at the 25 yard line.

The Viking Smurfs competed well and went 1-2 on the day. In their first game, they lost to the Red Land Patriots in sudden death overtime. Red Land would end up being the tournament runner-up losing to the champion Chambersburg Trojans. In their second game, the Smurfs beat the Lebanon Raiders 2-0. In their final game, the Vikings lost to the East Pennsboro Panthers in another exciting sudden death overtime game. Scoring touchdowns for Vikings during the Smurf Bowl were Kyson Clark, Brandon Heist, Liam Robertson, and Beckett Wetzel. This squad’s season is complete. The coaches expressed how proud they are of this team, as they have improved tremendously and learned a lot about the fundamentals of the game this season.

Up Next: On Sunday, the Viking Peewees will travel to Chambersburg (neutral site) in hopes of pulling another upset, this time over the #1 seeded Middletown Blue Raiders. 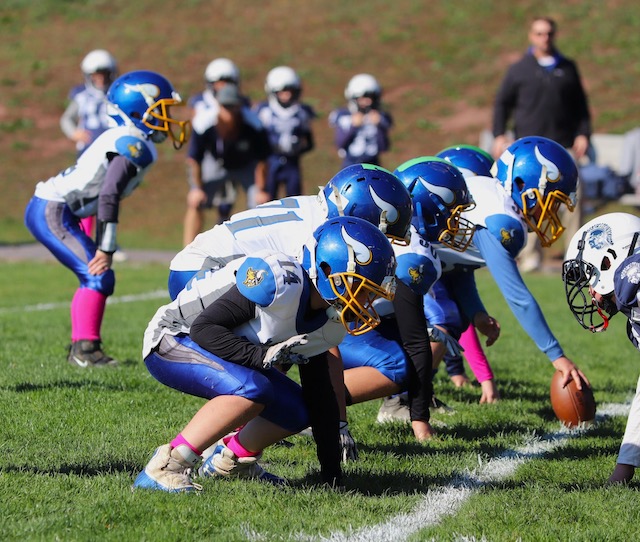 Where games are won or lost. The unsung heroes in the trenches. 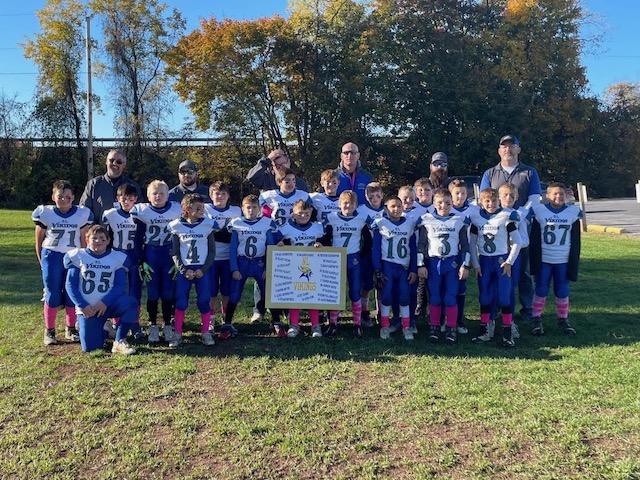 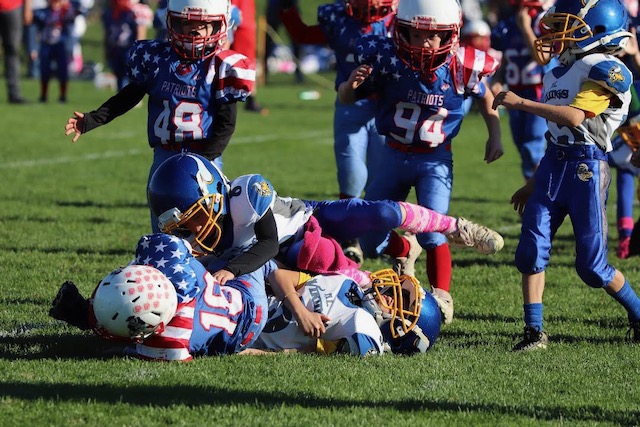 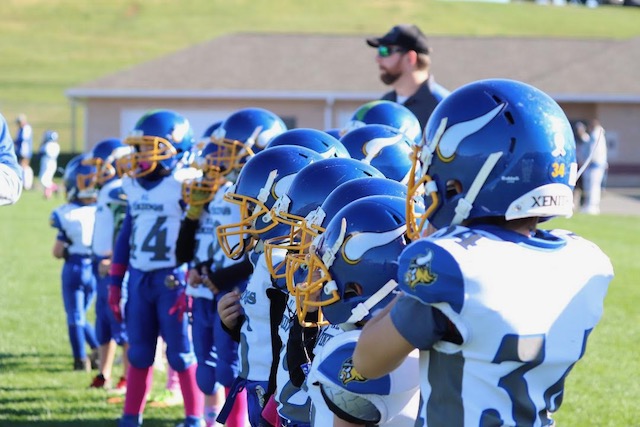 The Smurf team is ready

The Palmyra Youth Cougars hosted the 1st round of the Liberty Conference playoffs for the CFA at Buck Swank Stadium while the youngest squad traveled to Big Spring for the Smurf Bowl.

The Midget Cougars, fresh off their first loss of the season showed new resolve and focus as they stepped onto the turf at the Buck for the final time this season. They went deep into their bench so every Cougar got a taste of the action. The ecstatic cheers, from those on the sideline, when the newest, developing 13U players made they first tackles in a game proved this squad is looking beyond the points scored and towards to future as a team. This win earned them the chance to play Greenwood in the semifinals.

The Pony Cougars gave every fan in attendance a reason to visit their cardiologist. The defensive, back and forth battle keep the scoreboard blank until the 4th quarter. The 11U squad clawed in a score and held firm to end the game and advance to the Semi-Finals. The adjustments made defensively allowed them to withstand a persistent Bubblers offense. The Cougars will move onto the semifinals, where they will play Big Spring.

The Peewee Cougars continued success this season. This weekend’s success brought forth bright spots and performances from newer players to the 9U team. Not sure if it was the extra sugar in their systems from trick or treating hauls or just the playoff atmosphere, but every young Cougar came with high energy and an intensity not often seen in younger developing athletes.  They will put their undefeated record on the line against Hershey, as they are one win away from the CFA Super Bowl.

The Smurf Cougars traveled to Big Spring for the Smurf Bowl, the culminating event for the youngest players. While all season the teams do not get to keep scores, this weekend they finally had that chance. The 7U squad knocked off Good Shepherd early in the day, but fell to Gettysburg in the next round of the bracket in overtime. They ended the day with 2 wins and 2 losses, which earned them 4th place overall. While their season didn’t end the way the wanted it to, the growth they earned through the work they put in will serve them well next season.

Up Next: The Cougars will travel to Boiling Springs High School for the Semi-Final Round this Sunday, November 6th. With all three teams playing in a row, Palmyra is hoping to have a full cheering section throughout the contests. The games begin at 12:00 pm. 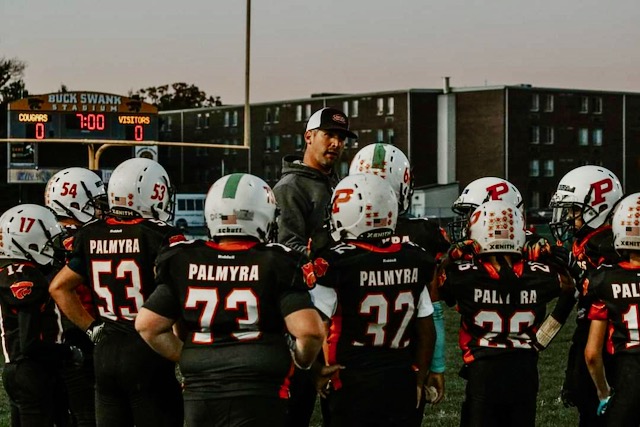 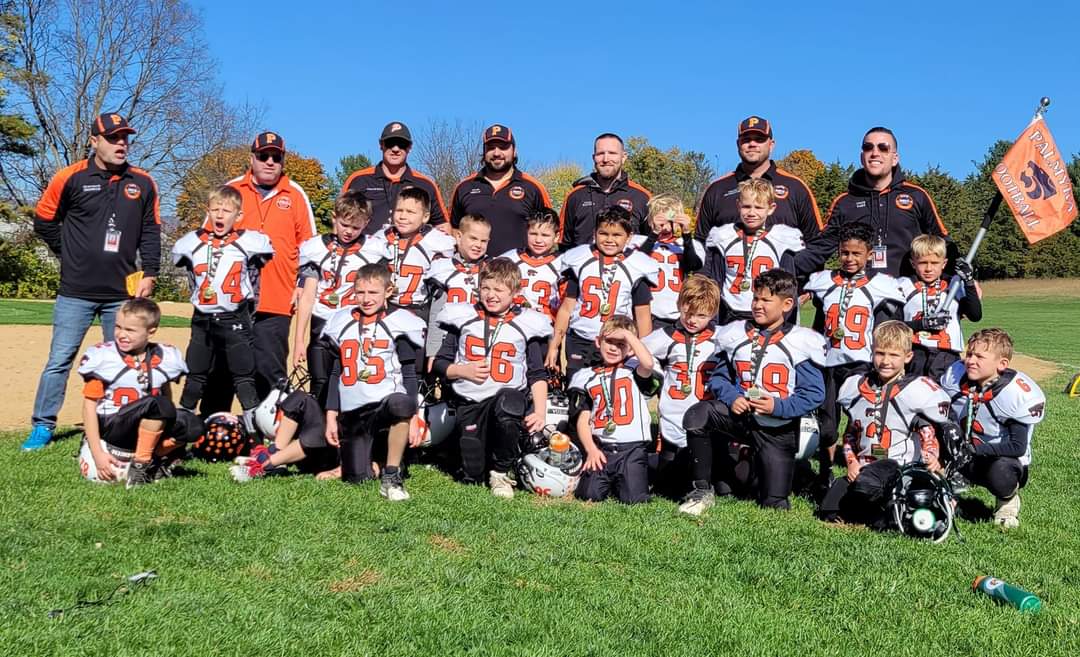