The Palmyra Youth Cougars ended their season at Bishop McDevitt’s Rocco Ortenzio Stadium at CFA Super Bowl 50 – Liberty Conference, with both the Midget and Peewee teams taking the field for a chance to bring the title back to Lebanon County.

The Midget Cougars engaged in a hard-fought defensive battle with the Trojans from the opening whistle, while eventually seeing their season end with a loss. While the other team celebrated, the rain began to fall around the 13U team as they huddled together for their final team talk from the coaches. The scoreboard did indeed reflect a victory for Hershey, but the Middle School Palmyra Cougars Team had an aura of accomplishment. The imprint they left over their past seasons with the Palmyra Midget Football Association has forever changed the landscape of football in Palmyra, as is evident throughout the season and the success of the other younger teams.

The Peewee Cougars plunged head-first into a stubborn Rams defense. Through the first 3 quarters, the game felt like it was only played between 40 yard lines. As the game progressed, tension and apprehension began to mount amongst all those in attendance. Slowly, the 9U Cougars defensive and offensive combination moved the battle lines deeper and deeper into Good Shepherd territory. With little time to spare, they ran a quarterback sneak and pushed the pile over the goal line to complete their undefeated season, along with a Super Bowl Championship.

The Cougars fall season has ended, but any time you earn the privilege of practicing beyond daylight savings is a blessing. Look for all these youth Cougars in their winter sports from wrestling to basketball. You can expect this team to be even more hungry next season now that they’ve collectively tasted what competing for, and playing in, a championship feels like. 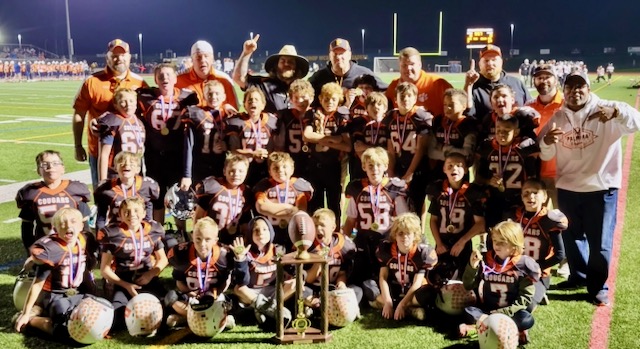