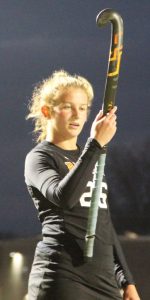 Now, the Palmyra field hockey team doesn’t reach the PIAA championship game every season. But when they do, the Cougars always go together.

On a frigid Wednesday evening at Governor Mifflin High School, Palmyra played well again, and again played well together, during a 3-1 victory over Gwynedd Mercy in the semifinals of the state Class AA postseason. The Cougars opened a 2-0 advantage early in the second half, and then after the Monarchs had sliced that lead in half, Palmyra produced a late exclamation point.

As has become their trademark, three different Cougars – Katie Lintz, Avery Russell and Alicia Battistelli – found the back of the cage.

With the triumph, District Three champion Palmyra improved to 21-2-2 overall and barged into yet another state championship game. Saturday’s 1 p.m. PIAA Class AA final at Cumberland Valley High School – against District Three third-place finisher Mechanicsburg, which edged Villa Maria Academy 1-0 – will represent the Cougars’ fourth appearance in a state championship game over the last five seasons, and their seventh in the last nine years.

All-time, Palmyra has compiled a 2-5-1 mark in its previous eight appearances in the PIAA championship contest. 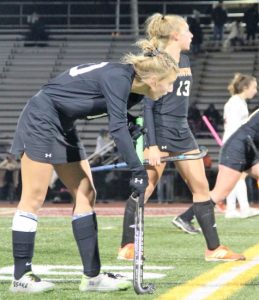 The loss ended District One runner-up Gwynedd Mercy’s season at 18-5-1 overall. It was the same Monarch outfit which had defeated the Cougars in last year’s state postseason tournament.

“There’s nothing  more than I can say about this team’s chemistry and camaraderie then this,” said Palmyra head coach Kent Harshman. “Last Saturday (when the Cougars defeated Twin Valley 5-0), the seniors were together from 7:45 in morning till four in the afternoon. They went home, took showers and then got together at the Battistelli’s house to bake. Then they came to my house to visit.

“That togetherness translates on to the field because no one ever takes that extra touch on the ball because I want it to be my goal,” continued Harshman. “They don’t care about personal stats, they care about Palmyra stats. That becomes a dangerous situation because we already know we have good players.”

Lintz opened the scoring with her 17th goal of the fall, 4:29 before halftime off a penalty corner. The insert went to Addy Shollly at the top of the circle, Sholly slid a short pass to her left to Lintz, and Lintz blasted home a medium-range bomb.

Just a few minutes earlier, with the game still score-less, the Cougars had employed a team defensive approach to short circuit a flurry of Gwynedd Mercy attempts in the goal mouth.

“It was important because it magnified what I’ve said about the team effort we’ve put forth all year long,” said Harshman of the key defensive sequence. “Everyone knows the ball has to stay out of the cage, not matter what. If we can get it out, get it out.

“I thought we played a great game against a great team,” Harshman continued. “They’re (the Monarchs) fast. They’re skilled. We could not have asked anything more from our kids. To our kids’ effort, we not only fought them off, we finished them off at the end. We weren’t satisfied.”

A mere 2:18 into the second half, Russell made it 2-0 on Palmyra’s first shot of the third quarter.

Russell was there to follow up and support a Lintz rush. Once she got close, Russell pulled off a little spin move and shoveled a wrister past Gwynedd Mercy goalie Lilly Sweeney.

It was Russell’s ninth goal of the season.

“I thought Avery Russell came alive in the second quarter,” said Harshman. “She was dominant like she has been in the postseason. We like to work the right side of the field when we can. When we did we had more control of the game.

“Our kids have been blessed to have postseason experience, some since their freshman year,” added Harshman. “They know what’s at stake. We always give great effort, and we’re trying to get that level of execution. I thought our kids were really good together.” 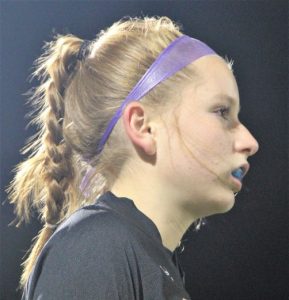 Palmyra never relented, but with 7:10 remaining the Monarchs tightened things up on Catherine Fitzgerald’s unassisted tally from a corner.

But Gwynedd Mercy never seriously threatened the equalizer, and with four seconds left, Battistelli converted a pass from Russell into her 21st goal of the season for the final score.

“We call them ‘aerials’,” said Harshman of senior captain and leader Olivia Kirkpatrick’s flow-controlling lifts. “She has an outstanding aerial. She’s been our quarterback out there since she’s been a sophomore. We went to Liv and told her she’s not going to score as many goals. She told us that she loves the exhilaration that comes from a great aerial.

“She can hit a target pretty well,” Harshman added. “It’s a game-changer. It’s a field position changer. It is dynamic. It’s a great weapon. ”

Each team was credited with nine shots on goal, and similarly each side was awarded six penalty corners. 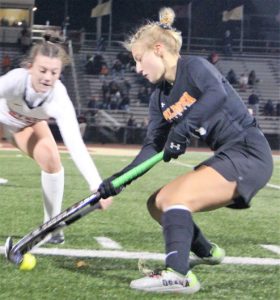 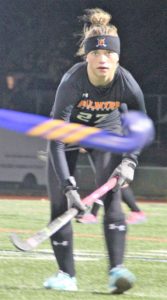 Sports Shorts from Around the Valley: November 14
Class of ’23 College Commitment Tracker (updated 11/17)