The AA Boys competition was held at Honey Run Golf Club and featured members of the Annville-Cleona golf team, who won the Lancaster-Lebanon League Championship last week.  In addition to qualifying as a team, the Dutchmen qualified two individuals, junior Reagan Flynn and freshman Logan Francis.

In the individual competition:

In the team competition that took place on Friday, Francis and Flynn were joined by sophomore Wesley Heller and junior Andrew Heller.  The Dutchmen finished 4th overall, with a team score of 364, 22 strokes behind 1stplace Delone Catholic.

This team finished in 2nd place, 5 strokes behind the Dallastown Wildcats.  Below are the scores from each Falcon.

In the girls’ competition, the focus was on Jill Fidler, as she was on a quest to qualify for the PIAA State Championship, where last year she finished tied for 24th in Pennsylvania.

After the first 18 holes on Friday, Fidler’s 79 shot performance had her positioned 5th on the leaderboard.  With the top nine girls getting an invite to the PIAA Championship, Fidler had to maintain her level of play on the challenging Briarwood Course.

On Day 2, Fidler not only maintained her level of play, but surpassed what she had done on Friday.  Through 32 holes, Fidler had moved into 4th.  Over the final 4 holes, she remained strong and finished the round with a 76.

Her scorecard total for the 36 holes was a 155, good enough for 3rd place and a PIAA State Tournament berth for the second time in her high school career.

In the boys’ competition, four Cedar Crest Falcons took to the links on Friday. In addition to the aforementioned Feeman, Ramsey, and DiBiaso, sophomore Ethan Rader also qualified after his 14th place finish at leagues.  Palmyra’s junior Sean Kelly was also a qualifier and helped to represent Lebanon County.

Fidler, Ramsey, and Feeman will all compete at the PIAA State Championship at Penn State Golf – White Course on Monday, October 17 and Tuesday, October 18. 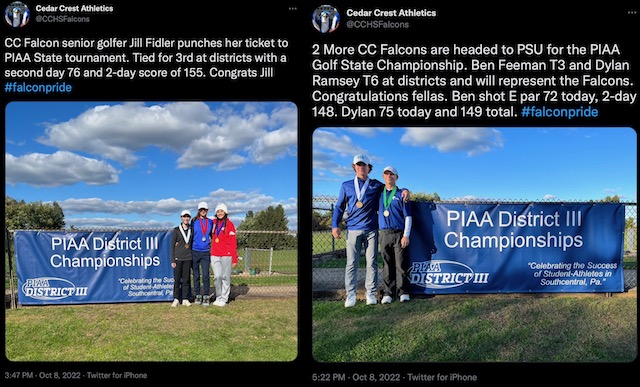 In additional golf action, the ELCO and Northern Lebanon teams met up for a final, non-league match.  The 3rdannual Battle of the Blues was held on Thursday, October 6th at Pine Meadows.  It featured modified rules that are based on the Ryder Cup with 6 holes of 2-man scramble, 6 holes of better ball partners, and 6 holes head-to-head action.

When all was tallied, it was ELCO who won by a score of 13.5 to 5.5.  The Raiders were led by Cole Weaver, Brady Keath and Colin Bogard and Ethan Spang.

Even though ELCO won the trophy, this is a fun event for both teams, with coaches from both teams joining in on the action (Northern Lebanon – Chris George; ELCO – Dave Meyer & Todd Gaffney).  After 42 years of coaching in a variety of capacities, this was Coach Meyer’s last official coaching duty.