Season Update: With an undefeated record so far this season, the Dutchmen will not run their final meet until October 11th due to the postponement of their meet at Lancaster Catholic, at which time they hope to secure the Section 3 crown.  They will have to get by either the Crusaders or Lancaster Mennonite at this meet to win the title, as they hold the tie-breaker on Octorara after a razor thin 1-point win earlier this season.  The boys seem to be ready with sophomore Landon Hostetter continuing to dominate, including a 10th place finish at the PIAA Foundation Invite held on September 24th.  Joining Hostetter in providing Annville with a strong 1-2-3 punch are sophomore Matthew Clemson and junior Samuel Domencic.  Rounding out the top five are freshmen Luke Tshudy and Oliver Funck.  Even though the Dutchmen have found success this season, they have yet to run their top seven together in a race.  With championship season around the corner, this Annville-Cleona squad looks like they will be ready to make things interesting.

10-13 Update: The Annville-Cleona boys won all three match-ups at Tuesday’s meet. Landon Hostetter won the meet with a time of 16:31. With this win, Annville-Cleona became the Section 3 Champions for 2022. 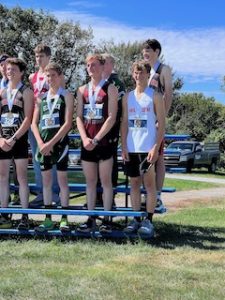 Season Update: The Falcons finished the regular season with a record of 5-2 in Section 1.  Junior Ben Causak continued to lead the way for Cedar Crest, winning the last two regular season races held on September 27th and October 4th.  Last Friday at the Paul Short Invitational, Causak ran a 16:13, which was the 8th fastest time in the history of Cedar Crest Cross Country.  Joining Causak in the record books was senior Owen Sparks who dropped a 16:30 (19th all-time) and junior Jake Perhonitch who ran a 16:33 (21st all-time).  This set of strong frontrunners will be aided by a pack of runners who will be working hard to close out the scoring in the championship races that will be run in the coming weeks.  In order to prepare for the next phase of the season, Cedar Crest will compete against Lebanon in an innovative meet / joint training session to be held at South Hills Park on Monday, October 10th.

Season Update:  The Raiders finished the regular season with a 5-2 record and seem to be coming into their own at this point of the season.  The team is led by senior Landon Brubaker and junior Chad Keller, with Keller running his fastest time of the season (17:17) in Wednesday’s finale at Pequea Valley.  In fact, at this race seven of ELCO’s boys ran their fastest times of the season.  Among that group are sophomore Gabe Asper and junior Wesley Doll who have begun the tough task of closing the gap between the scorers.  This is something that Coach Gerberich knows will need to improve in the post-season for his team to do well as an entire unit.  Beyond that, some of the individuals performances should allow ELCO to have a strong showing as the season continues in the larger championship races.

Season Update: The Cedars may not have won a Section 1 match-up, but have shown consistent improvement among the runners on the team.  This kept them competitive in many dual meet situations over the course of the regular season.  Among those showing improvement was senior Brendon Shaak who had not broken 19 minutes prior to the Carlisle Invitational when he posted 17:54 in a breakthrough performance.  The star of the team has continued to be the rookie junior Ramon Urena, who ran a 16:37 at Carlisle enroute to a 38th place finish overall.  Urena is on pace to be a Section 1 – 1st Team All-Star, is preparing to have a successful post-season, while the team as a whole is looking forward to the Lancaster-Lebanon League Championship Meet on October 18th.  Before then, the Cedars will host Cedar Crest for an innovative meet to better ready their runners for the championship level racing.

Season Update: The Vikings completed their regular season on a construction shortened course this past Wednesday.  They finished with a 4-3 regular season record and are poised for the post-season. Junior Tyler Shunk has continued to lead the Northern Lebanon team and has remained in the lead pack in every Section 3 race run this season.  Many other members of the Vikings team have developed throughout the season.  Following Coach Schafebook’s training plan these boys should be ready for post-season racing.

Season Update: The Palmyra Cougars finished their regular season on September 27th with a record of 3-3 in the Mid-Penn Keystone Division.  In the final meet, officially an away meet that was hosted by Palmyra due to a scheduling conflict, the boys were led by juniors Jake Vottero (18:45) and Logan Mierzwicki (19:20) as the Cougars picked up a victory against Susquehanna Township.  At the Carlisle Invitational on September 24th, it was Vottero (17:40.8)  and Mierzwicki (18:13.8), along with Cougar freshman Cornelius Cummings (17:13.5)  leading the team to an overall finish of 46th out of 76 teams.  With the Mid-Penn Championships up next on the schedule for October 15th, the boys have time to prepare for the next round of racing.  With improvement shown by the boys over the course of the season, with many having their best overall races last Tuesday, this group should be ready to peak at the right time.