Season Update: The Annville-Cleona ladies are having a great start to their season, carrying an undefeated record through the first leg.  As a team, they have finished 6th at the LVC Dutchmen Invite and then finished 4th in the AA race at the Ben Bloser Bulldog Invite this past weekend.  The most recent invitational gives A-C a good idea how they may be able to compete at Districts, which has them feeling very confident that as a group they can achieve a lot.  Leading the way for this squad is freshman Mackenzie Stellmach, who has finished 8th and 13th at the invitationals, carrying a season best time of 20:14.6.  Beyond Stellmach, the Annville girls are running in tight packs, with Nory Mitchell and Emily Maag as the team’s #2 & #3, along with another tight pack of girls in the #4 – #7 slots.  The junior Maag, along with sophomore Emilie Stefanchik, are showing commendable improvement that has aided the team as a whole.  The team’s leader is the senior Mitchell, who has helped guide and encourage her younger teammates.  The goals for this team are to continue working on their pack running, which will lead to positive competition in the form of support that will help Annville-Cleona ready themselves for the District 3 Championship race. 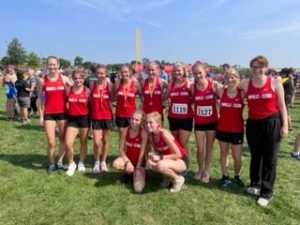 Season Update: This Cedar Crest is off to a hot start, winning three of their first four matchups in a tough Section 1 and doing well at the two invitationals in which they have competed.  As a team, they won the LVC Dutchmen Invitational and followed it up with a 5th place finish in the AAA division at the Bloser Bulldog Invite.  The clear frontrunner for this squad is the freshman dynamo Eliana Schneider, who finished first at the Dutchmen Invite in 19:02, the fifth fastest time in Cedar Crest XC history.  She followed up that performance with an eighth place finish at Bloser.  Schneider is not the only talented runner on the team, as her teammates Lizzie Lowe (Jr.), Jillian Tobias (Sr.), and Audrey Fugate (So.) have formed a strong 2-3-4 pack, which is necessary to do well in cross country team scoring.  Rounding out the top five have been two quality options working to close out the scoring in each meet: Maddie Lowe (Jr.) and Sarah Durning (Sr.).  Coach Risser points out how close-knit this team is as they have supported each other from the start of off-season training and have become tough runners who are committed to one another.  This TEAM mentality ultimately helps all of them to achieve, but their potential for success may not yet be realized.

Season Update: The Raiders have started the season with three wins out of four opportunities, with their only loss to Annville-Cleona.  The team is showing signs that they are continuing to improve.  They are looking forward to a key meet against Octorara, which will be a true test of their progress.  The team has been led by senior Isabel “Izzy” Zwally, who qualified for the 2021 PIAA State Championship Meet and who is currently working hard to ensure a return trip.  The team as a whole is looking forward to seeing what they can do when they reach Districts where the competition is boiled down to similarly-sized AA schools. 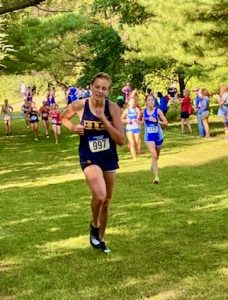 If you missed out coverage on the 2022 LVC Dutchmen Invitational, where all six county teams competed, you can find it here.

Season Update:  Lebanon was very happy to have a bye-week, as the Cedars have been dealing with injuries that have prevented them from fielding the minimum five runners needed for a team score.  The main goal now is to get everyone healthy.  One bright spot for this team has been senior Mileyshka Calderon, who is not pegged a true distance runner, but who has worked hard and is gaining the strength that will benefit her in the longer sprints during track season. While a tough pill to swallow at times, it is worth noting that cross country can be just as much of an individual sport as it is a team sport.

Season Update:  Northern Lebanon came into the season knowing that they had a strong set of senior leaders and they have been able to balance it out with a mix of newer, younger runners who are developing.  Among the seniors, Alyssa Marlowe has been leading the way in races for the Vikings, posting a season best time of 23:01.8.  There is still plenty of time for more developmental work that will benefit the younger runners as they will someday be called upon to lead.

Season Update: Coming into the season, the Cougars knew that they had a lot of talent to replace from the 2021 team.  So far, they are showing that they are up for the challenge, beginning the season with a 3-1 record along with a strong second place finish at the Dutchmen Invite.  Ellie Schaffer (So.), Abby Berarducci (Jr.), and Avery Rohrer (So.) are a strong lead pack, from which Palmyra is benefitting.  This is especially true as they have continued to close their spread over the first three races of the season (down to :30  on Tuesday).  The issue will be having the depth to close out the team scoring, but there are a couple of prime candidates to fill in these roles for Palmyra.  With a month to go until Districts, the coaching staff will continue to develop a very motivated group of runners with hopes of playing key roles in helping the team succeed.