Results are current through September 11, 2022

Season Update: Annville-Cleona may have started out with two losses, but last week got on the right track with wins against county rivals Cedar Crest and ELCO.  Leading the team in goals is Josie Clay, who has netted 4 scores.  Sophomore Tori Cisney has contributed 2 goals and 2 assists, while junior Grace Francis has contributed two of her own.  With aspirations to win Section 4, this AC team is seemingly on the right track as they have several key match-ups awaiting them in the near future.

Season Update: The Falcons have begun the season with a 2-3 record, with two of those losses occurring in overtime.  This past week, Cedar Crest defeated Hempfield when they scored on a corner with no time remaining on the clock.  Leading the offensive output has been junior Danielle Schroll who has 17 points off of 8 goals and 1 assist.   Seniors Paige Bucher and Ashley Lamson have also contributed heavily to team’s offensive efforts, with senior goalkeeper Hailey Newmaster defending the cage on the other end of the field.  Coach Arnold described Newmaster’s performance as “incredible”, an effort that has been aided by the defensive play of juniors Sierra Margut, Anna Moyer and Reese Arnold.  There is much to be happy about at Cedar Crest, even if their record is on the wrong side of .500.  They will need to continue to perform at a high level as they open play against their Section 2 opponents later this week, but the coaching staff feels that the players have put in the work and are well-prepared to make a successful run through the schedule.

Additional Note: On September 26 at 7 pm, Cedar Crest will host Donegal for the 2nd Annual Gray Out Game, which will raise money for brain cancer research at Penn State Hershey Medical Center.  This is in memory of the late Dave Arnold, husband of Coach Alicia Arnold, who was lost to brain cancer in January of 2021. 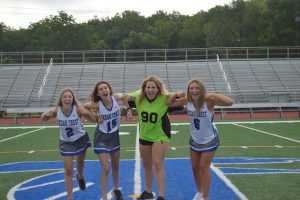 Season Update: The Raiders have gotten off to a slow start this season, but their fortunes may be changing after winning the Muhlenberg Tournament this past weekend.  In a hard fought overtime victory, ELCO was able to defeat Daniel Boone through a total team effort.  Coach Thorley noted that the team is really coming together so much that it is tough to identify one key contributor.  She also cites the depth that they have on the bench will serve them well as the season intensifies.  With some tweaks made to match the strengths of the team, this ELCO team is in good position to begin putting together some wins as they get into the heart of their Section 3 table. 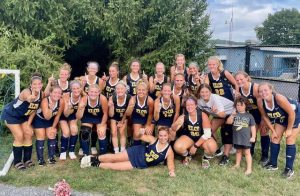 Season Update: Entering the season, the Cedars knew that they were going to have a learning curve when entering game situations.  With a 1-2 record, they are beginning to gel as a unit.  This translated to a hard fought overtime victory against York County Tech, during which the game’s lone goal was scored by Jayli Morales, as she was assisted by Zujuanlisse Figueroa.  Other key contributors for Coach Thomson’s squad have been senior Allison Thalen, freshman Jezauni Hernandez, and sophomore goalkeeper Mya Gonzalez.  As the schedule picks up, there is a great opportunity for this team to continue on its trajectory of improvement.

Season Update: Northern Lebanon entered 2022, not knowing what to expect.  So far, they have struggled with two losses in their first two contests, being held scoreless in both.  They are no doubt struggling to create offense, but this has actually created a silver lining for the Vikings.  That positive is the play of their goalies, who have seen an increased amount of action.  Abby Clemson has faced 26 shots, saving 16, while Madelyn Schelhammer has saved 5 of 7.  Senior Hope Ritchie has also stepped up as a defender, trying to protect her goalies.  If Northern Lebanon can begin pressing on the offensive end, this early season barrage they have faced will pay dividends. 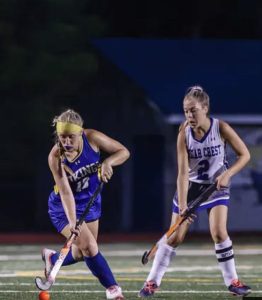 Season Update: Coming off of last season’s disappointment, the 2022 Palmyra Cougars came into the season hungry and knowing what they needed to do in order to make a deep run in the PIAA State Playoffs.  Strong senior leadership has helped to guide the unit as they have begun the season with a 4-0 record.  This record includes a key victory against a very strong Mechanicsburg team, which is also a Keystone rival.  The Cougars then went on to outscore Dallastown and Central Dauphin by a combined score of 17-0 enroute to winning the Cougar Classic. The offensive firepower has been a collective effort so far this season, with the following contributions: Keely Bowers – 4 goals, 4 assists; Katie Lintz – 4 goals, 4 assists; Jovie Weaver – 4 goals, 1 assist; Alicia Battistelli – 4 goals; Avery Russell – 2 goals, 2 assists; Hadley Hoffsmith – 2 goals, 1 assist; Olivia Kirkpatrick – 2 goals, 1 assist; Alaina Bryan – 2 goals; Mallory Hudson – 1 goal, 2 assists; Addie Sholly – 1 goal, 2 assists; Liv Gain – 1 assist. They will need this offense and total team effort to continue as they will continue sharpening their skills against some of the best competition in Pennsylvania over the next two weeks.  This schedule includes several match-ups again tough Mid-Penn Keystone opponents, L-L powerhouse Manheim Township, and the MaxFieldHockey Tournament, which will feature some of the nation’s best teams. 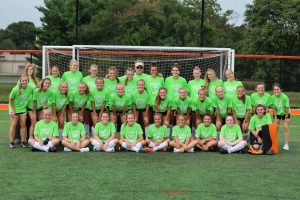