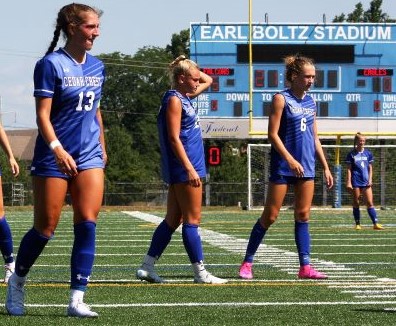 Let’s just say that Young and the Cedar Crest girls’ soccer team are both glad she’s back, and leave it at that.

On Saturday, Young made a triumphant and spectacular return to the pitch during the Falcons’ 6-1 season-opening home victory over Cocalico. After missing her junior year to rehabilitating her third ACL tear, all Young did was go out and tally four goals and an assist.

Apparently 100 percent healthy, Young was all over the field, setting up teammates, breaking down defenders and working hard. Her goals were scored in a variety of ways – off a rebound, through speed and dribbling, and with her dangerous right foot.

Young’s third ACL tear – in her right knee, after suffering two in her left knee – occurred in June of 2021, just before the start of her junior year as a Cedar Crest midfielder. But she returned to run track and field for the Falcons this spring.

At this year’s Lancaster-Lebanon League Track and Field Championships, Young finished third in the 200-meter dash and helped Cedar Crest to a runner-up finish in the 1600-meter relay.

Certainly her return to the soccer field will bolster the hopes of a Falcon squad that qualified for the District Three postseason last year without her.