The highly anticipated clash between two of the Lancaster Lebanon League’s best girls’ basketball teams took place at Lebanon High School on Saturday afternoon.  Coming into the game, the Cedars were 12-0 (1st in LL Section 1, 3rd in District 3 6A Power Rankings) and the Mounts were 10-2, running 2nd in Section 2 after a loss to Manheim Central earlier in the week.  Ephrata’s record put them at 10th in the District 3 6A Power Rankings.

The Cedars scored the first points of the game when Aaliyah Ferrer stole the ball and found teammate Kailah Correa for the bucket.  After Ephrata knotted the game at two, the Cedars came back down the court and found Liliana Harrison who muscled her way down low for the score.  When Ephrata attempted to inbound the ball, it was stolen and converted into a field goal by Correa to give the Cedars a 6-2 lead.  After keeping Ephrata from scoring, Harrison’s teammates again fed her the ball near the basket, an opportunity upon which she converted.  With 5:44 remaining in the first quarter, the home team had built an 8-2 lead.

Ephrata quickly regrouped, scoring the next three to cut the lead to 3.  The next trip down the court, Olive Brandt took the chance to go into attack mode in the paint, drawing a shooting foul and going 1 for 2 from the line to make the score 9-7.  Lebanon then forced another steal, hitting Correa in transition.  Ephrata’s only choice was to foul the phenom and send her to the line.  Going 1 for 2, Correa made the score 10-7 with 3:49 left.

At that point, Coach Walborn went to her favorite substitute Jae Burrus in order to give Zariyah Whigham a breather.  Less than a minute after entering into the game, the sparkplug Burrus spotted up and drilled three-pointer to make it a 13-7 game.  Ephrata would go on a 3-0 run over the course of the next half-minute, before Harrison once again showed how difficult she is to stop around the basket as she scored again to make it a 15-10 game.  With 1:45 remaining, Whigham reentered the game and immediately showed off her skills, coming up with a key block.  However, Ephrata again regrouped and scored the last four points of the frame.  Jasmine Griffin scored 11 of the 14 points for the Mounts, while the Cedars scorers were as follows: Harrison – 6, Correa – 5, Burrus 3, Brandt – 1. 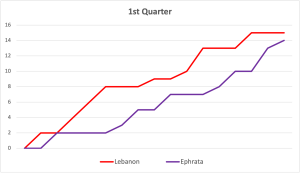 The first 90 seconds of the quarter was a shift to the rate at which the two teams had been scoring.  Though, Ephrata’s Cara Tiersi gave her squad their first lead of the day when she nailed a three-pointer at the 6:30 mark, making it 17-15 in favor of the Mounts.  Another 75 seconds would melt away before the next points were registered, which came courtesy of Harrison fighting through contact to score.  After she missed her and-one the scoreboard showed 17-17 tie.  At the 4:24 mark, the Cedars were again able to convert a change of possession into a fastbreak, this time with Correa scooping the ball to outmaneuver the collapsing defender. Less than a minute later, Correa stole the ball, ran the floor, then went to her left hand for the layup in order to finish while she was drawing contact. After a successful free throw, Correa’s 5-0 run made it 22-17.  During stretch, it was Whigham’s tenacity that was on full display as she forced a jump ball and fought hard for rebounds.  Though, as with the first quarter, Ephrata’s Griffin came alive in the waning minutes, picking up a field goal and a successful free throw.  Her trip to the line came as a result of Harrison’s third foul, which was something to watch going into the second half. 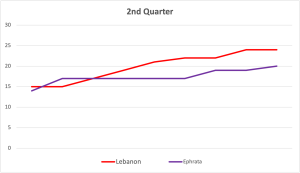 The second half scoring opened with Harrison battling in the paint and drawing a shooting foul.  Upon going to the line, she converted on her first attempt.  The second attempt missed, but Correa grabbed it and kicked it to Brandt.  Brandt took full advantage of the opportunity and sank a three-pointer to give the Cedars an 8-point lead (28-20).  Tiesi nailed another three-ball for Ephrata and Griffin hit a free throw to cut the lead in half (28-24). Griffin’s trip to the charity stripe was the result of Harrison’s fourth foul, which sent her to the bench.  Around the 5:00 mark, the Cedars hit their accelerator, first with Correa scoring on a fast break and then Brandt scoring on a contested layup to make it 32-24.  The two teams traded two-pointers, but at the 2:06 mark it was Brandt who dazzled the crowd (and the boys’ basketball team members who were in attendance) when she used a crossover deep in the paint to lose her defender and give her a high percentage shot, which she converted to make it 36-26.  Ephrata again hoped to make a late quarter run, as they converted one a free throw and a field goal to cut the lead back down to seven.  However, Burrus had other ideas and knocked down a three-pointer from the wing with :10 remaining in the quarter. 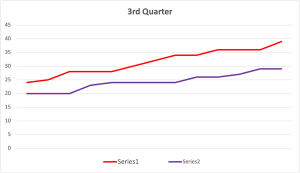 Again the first minute of the quarter would go by until anyone was able to score.  At the 6:50 mark, Aaliyah Ferrer hit a 15-footer to give the Cedars a 12-point advantage. Ephrata’s Griffin scored her twentieth point of the afternoon when she hit a floater in the lane.  Cutting the lead back down to ten, the Ephrata coach called a timeout to lay out the next steps of their comeback strategy.  At that point Coach Walborn decided it was time to bring Harrison back into the game at the risk of fouling out.  Ephrata scored again to make it a 41-33 game before Correa slashed to the hoop for another two.  This was not enough to slow down a determined Ephrata as they would score four unanswered, causing the scoreboard to read 43-37 with 4:41 remaining.  Lebanon used its first timeout to regroup.  The Cedars went back to what worked early in the game and gave the ball to Harrison down low for the score.  At the 2:36 mark, Whigham again swatted an Ephrata shot attempt, which led to an outlet pass to Correa.  She converted to stretch the score to 47-37.

In the previous three quarters, Ephrata made some noise.  At the 2:25 mark, it was Burrus who picked up her fourth foul, greatly impacting Lebanon’s defensive plans.  When Ephrata scored to make it 47-39 with 1:59 remaining, the Lebanon bench called for a full timeout.  Out of the timeout Lebanon looked to slow the game down, opting for high quality shots instead of looking for the most expedient choice.  With 1:01 left, Whigham grabbed a rebound and turned garbage into gold, making it a 49-39 game.  When she came down with a rebound thirty second later, she was promptly fouled as the Mounts had no other choice.  It was her free throw that was the last point of the game. 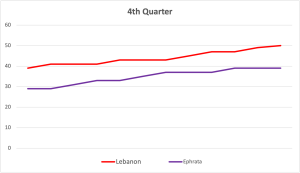 The Cedars moved to 13-0 on the season, while the Mounts left Lebanon as a 10-3 team.  Lebanon’s Kailah Correa finished with 20 points, but it was Jasmine Griffin’s 26 points that led all scorers.  Liliana Harrison was the only other player in double digits, scoring 11 points on the day.  The Lebanon team was tenacious throughout the game, forcing turnovers and grabbing key rebounds.  Beyond the main point scorers, it cannot be underestimated as to how valuable the other Lebanon players (Whigham, Burrus, Ferrer, and Brandt) were to this win.

Lebanon will put its undefeated record on the line when they travel to Hershey on Monday night.  In total, they have nine regular season games remaining before the post-season begins. 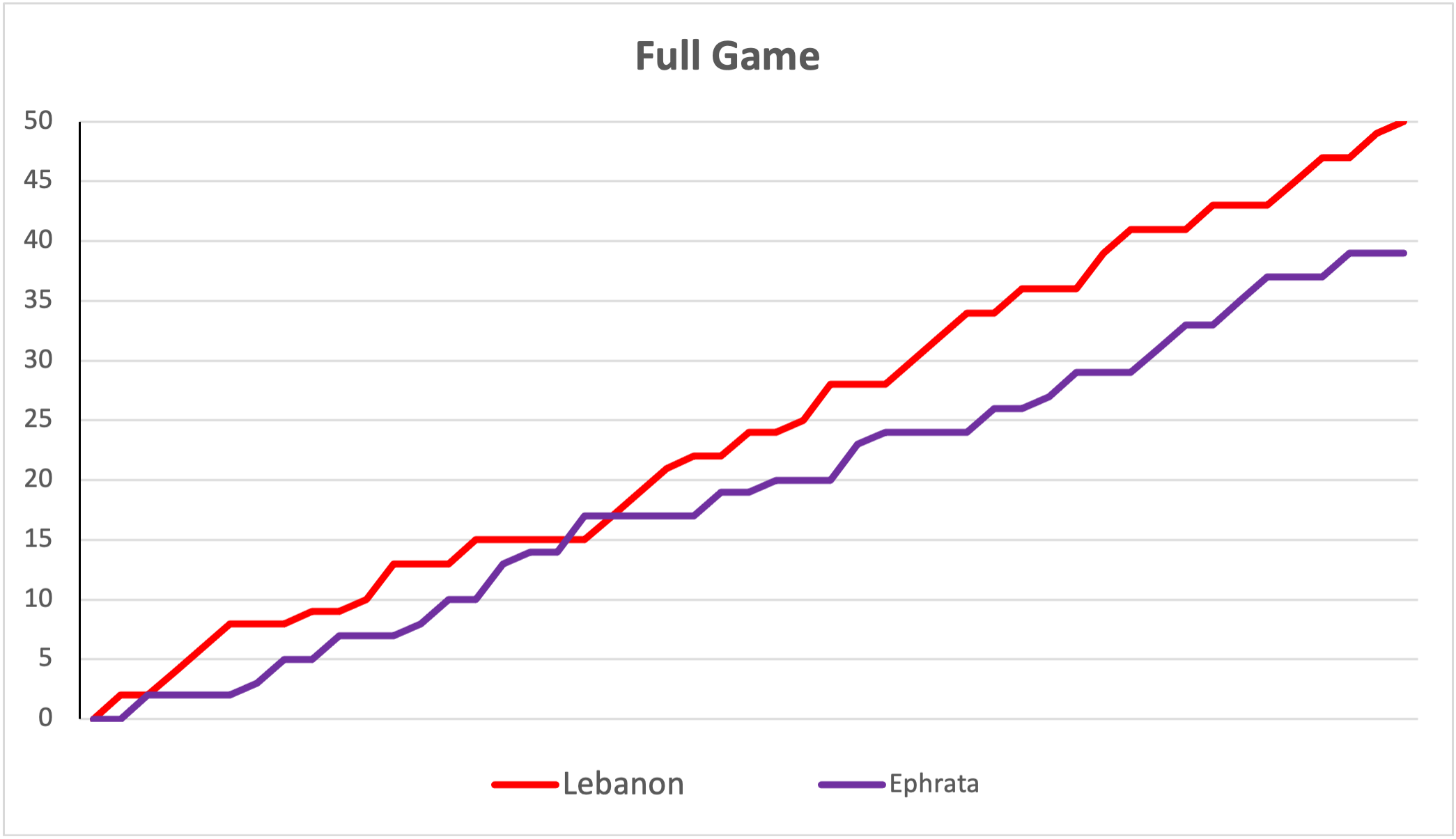 A special shout-out to Lebanon Biddy Basketball player Lyla Rau for her data collection that allowed for the game flow charts to be included.