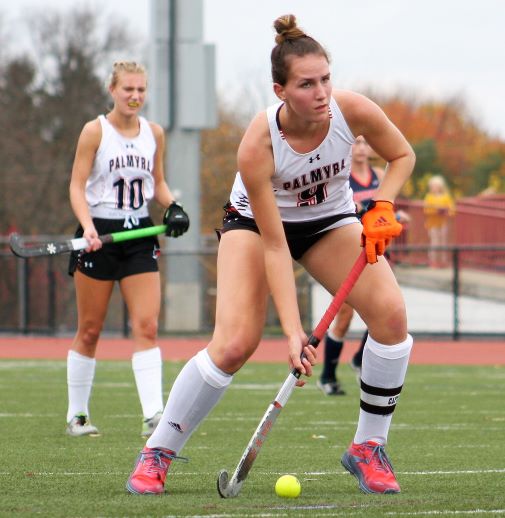 She’s like a coach on the field. She’s the heart, soul and mind of the Palmyra field hockey team.

While her name doesn’t always show up on the scoresheet, now Olivia Kirkpatrick is pushing to become one of the most influential players in the history of the Cougars’ storied tradition.

This week, Kirkpatrick paced Palmyra to its 14th District Three championship, and the second in her illustrious career.

On Saturday at Central Dauphin Middle School, the senior captain and midfielder was in the middle of everything that was good, as the Cougars performed admirably during a 2-0 victory over rival Hershey in the D3 Class AA title tilt. Palmyra had reached the championship game with a 2-1 semifinal triumph over Mechanicsburg at home on Wednesday.

Against the Trojans, Kirkpatrick was everywhere, controlling the midfield of the field and putting teammates in position to succeed. She was both a force offensively and defensively for Palmyra versus Hershey.

It was just another consistent outing in what has morphed into an absolutely marvelous senior campaign for Kirkpatrick.

As a sophomore in 2020, Kirkpatrick was one of the main cogs in the Cougars’ drive to the PIAA Class AA championship.