Cougars Have Sights Squarely Focused on Next District Championship 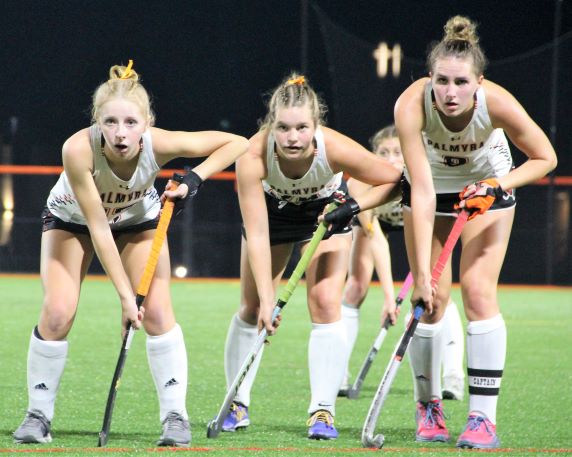 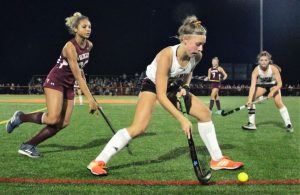 PALMYRA – Every game against Mid-Penn Keystone Division competition is super important. But at this time of the year, the next game is the most important.

So by the associative property of field hockey, the next game against a Keystone Division team is always the most super important.

On a seasonable Wednesday evening at Palmyra High School’s OAL Sports Complex, the Cougars performed well in their most important contest to date, edging Mid-Penn Keystone Division rival Mechanicsburg 2-1, in the semifinals of the District Three Class AA playoffs. Following a score-less first half, Palmyra netted a pair of corner-play tallies 2:24 apart early in the third period, and the second one proved to be decisive. 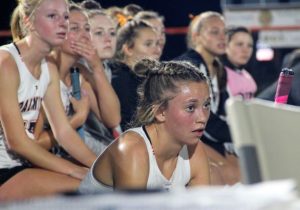 With the victory, top-seeded Palmyra, now 16-2-2, barged into another District Three Class AA championship game against another Mid-Penn Keystone Division foe, second-seeded Hershey, which nudged Twin Valley 2-1 in the other semifinal. That title will be determined on Saturday at 1 p.m. at Central Dauphin Middle School’s Landis Field.

The Cougars will be making their 14th District Three final appearance in 22 seasons. Palmyra has gone 11-2 in the previous 13.

It was a similar Mechanicsburg club which had shocked Palmyra 3-1 in this round of last season’s District Three Class AA postseason tournament. Then in the recently completed regular season, the Cougars defeated the Wildcats 1-0 in Palmyra on September 7, before the two sides fought to a 1-1 draw in Mechanicsburg on September 27.

Through the first 35 minutes of action, the game was a hotly contested, tightly-marked defensive battle.

But off a corner 5:22 into the second half, Palmyra grabbed a 1-0 lead on an Alicia Battistelli goal assisted by Keely Bowers. After inserting the corner, Bowers got her stick on a high shot at the left door step and directed it to Battistelli, who slid the ball into the open side of the cage.

“If you’re able to score the first goal in a game like this, it’s a bit of a lift,” said Harshman. “Mechanicsburg had played us toe-to-toe to that point. But when you score first you start to see kids’ chins going up, and their confidence start to build. 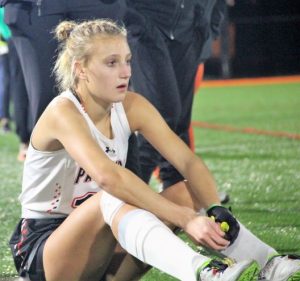 “Our corner execution is getting better,” added Harshman. “We’re doing more in practice, looking to do more on corners. We’re working on a lot of things. We’re getting dangerous. Now’s the time to be getting better at them.”

With 7:14 of the third quarter remaining, the Cougars generated another dangerous scoring opportunity off a corner.

A Palmyra shot from the right side of the circle was turned away by Wildcat goalie Alexandra Brady. But Cougar Avery Russell was there, and moving to her left, she pushed the ball into the cage to make it 2-0 Palmyra.

“If you keep that pressure up and keep going and going and going, eventually something’s going to break,” said Harshman. “I thought we played well in the midfield. I think team chemistry has a lot to do with it, but very little one-v-one goes on. They (his players) have bought into everything the coaching staff has asked of them. But we actually try not to play one-v-one.”

After the two goals, the Cougars encountered some difficulties sustaining their attack.

Then with 4:01 remaining, Natalie Wilson scored off a rebound from a corner to pull Mechancisburg to within a goal of the lead. But the Wildcats never seriously threatened the equalizer. 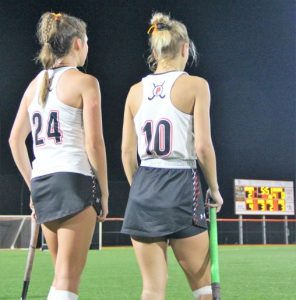 Each team recorded seven shots on goal, while Palmyra enjoyed a 6-3 advantage in penalty corners.

“No, I don’t think the regular-season meetings had any effect on tonight,” Harshman added. “Any time you play a Keystone Division game it’s going to be a war. We got a goal from Jovie Weaver here in the first game. Then, in the second game, we didn’t play very well there. But I don’t think either of those two games had a bearing on this game.” 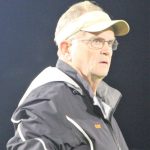 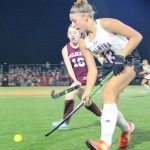 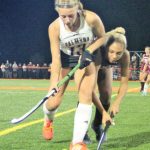 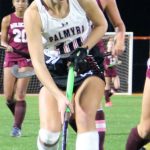 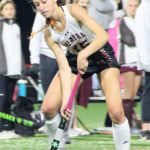 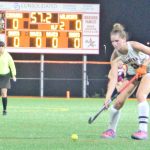 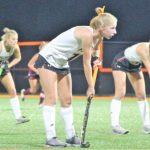 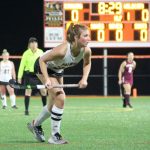 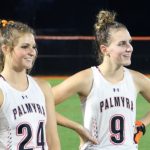 Hershey has Palmyra’s Number When it Matters Most
The Road to the District 3 Finals: Palmyra Field Hockey