All results are current through September 14.

Season Update: The Falcons have started the season with a 1-3 record, with their one win being over Section 1 opponent, Warwick.  They also seem to be picking up momentum after recently winning the Solanco Invite Volleyball Tournament.  Coach Sheaffer’s squad is led by senior Sophia Rosenberg, along with sophomores Lily Tice and Jenna Bowers.  Rosenberg is the opposite hitter for the Falcons, as she is a lefty and is the go-to option in their offensive scheme.  She uses what is described as a great swing and a consistent serve, combined with a high volleyball IQ to lead the Cedar Crest attack.  Tice plays libero, a position from which she has proven she can read the ball very well and uses a strong jump float serve to put the ball in a good position.  The setter for the Falcons is Bowers, whose range allows the team to run a 5-1 rotation.  Currently, the Falcons are just out of District playoff contention, but they have plenty of season left and the talent that will allow them to win matches.

Season Update: The Raiders entered this season with high hopes, resulting from the experience they were bringing onto the court.  Leading the group is senior Taylor Stone has 123 assists, 27 aces, and 66 digs.  She just set a major career milestone this past weekend by surpassing the 1,000 assist mark.  In ELCO volleyball history, Stone also ranks #2 in total sets, trailing only behind her sister Maddie Stone, a 2019 graduate. Other key players contributing to a balanced Raiders attack include seniors Brooke Auker (35 kills), Emily Snader (32 kills), and Gabby Smith (25 kills).  ELCO is 3-3 overall, which includes a 2-2 record in Section 3.  Due to their early strength of schedule the Raiders look like they are well out of District playoff contention, but they have a chance to advance rapidly if they can score some wins in a tough stretch of games that is ahead of them. 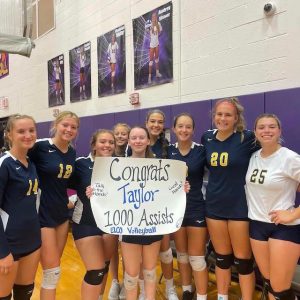 Season Update: Lebanon may be 0-5, but that is not an accurate depiction of how this team has played.  In fact, each of their losses so far has been against a team that would currently qualify for District playoffs if the season were to end today.  Coach Dissinger is excited, as his team has shown improvement in each match.  The season stat leaders for the Cedars have been: Alecia Disla Duran (Sr.) – 26 kills;  Nicole Gonzales Ramirez (Jr.) – 71 digs; Kariana Minaya (So.)  – 12 aces; Noelani Cruz (So.) – 46 assists; Lilianna Harrison (So.) – 14 blocks. On Saturday, the Cedars host a tournament for six area teams that will include ELCO, Northern Lebanon, and Conrad Weiser.  This tournament will serve as an opportunity for the squad to continue its improvement, which will aid them throughout the rest of the season.

Season Update: The Flames are currently 5-1 and sit in a good position to make Districts, even after they bumped up in classification after the co-op with Annville-Cleona took effect.  Coach Leonard has been very impressed with the grit and determination of this team that has allowed them to win many close sets in through their first six matches.  Their only loss came at the hands of Covenant Christian Academy in a five set match, but the team showed its resolve by winning their next three matches.  New Covenant Christian is playing as a team, with everyone contributing.  This will make them a tough draw for their remaining opponents.

Season Update: Northern Lebanon has started the season 3-0, which should not be a surprise to anyone who paid attention to how the Vikings fared a season ago and who they returned to the lineup this season.  They are making an attempt to run it back with talented seniors Sam White , Hailey Pierce , and Hope Wentling leading the charge.  Each of the aforementioned ladies were Section 3 All-Stars, with White being named Section 3 MVP.  Though early, they have already scored a key early season win over Lancaster Catholic.  They will need to continue at a high level of play to win Section 3, a task for which they are fully prepared.

Season Update: The Cougars had a rough go of it in 2021, but came into 2022 with having put in the work to fully expect that they had improved.  They were right, as they are currently 4-3 (four more wins than last year).  They are 2-1 in the Keystone Division, including a key win over rival Hershey.  They are on the bubble for Districts, but Palmyra is proving that this is not last year and that they should be respected, if not feared.