Abbie Keath’s Staring Down Cancer Like She Does All Her Opponents, with Courage, Resolve and Intelligence 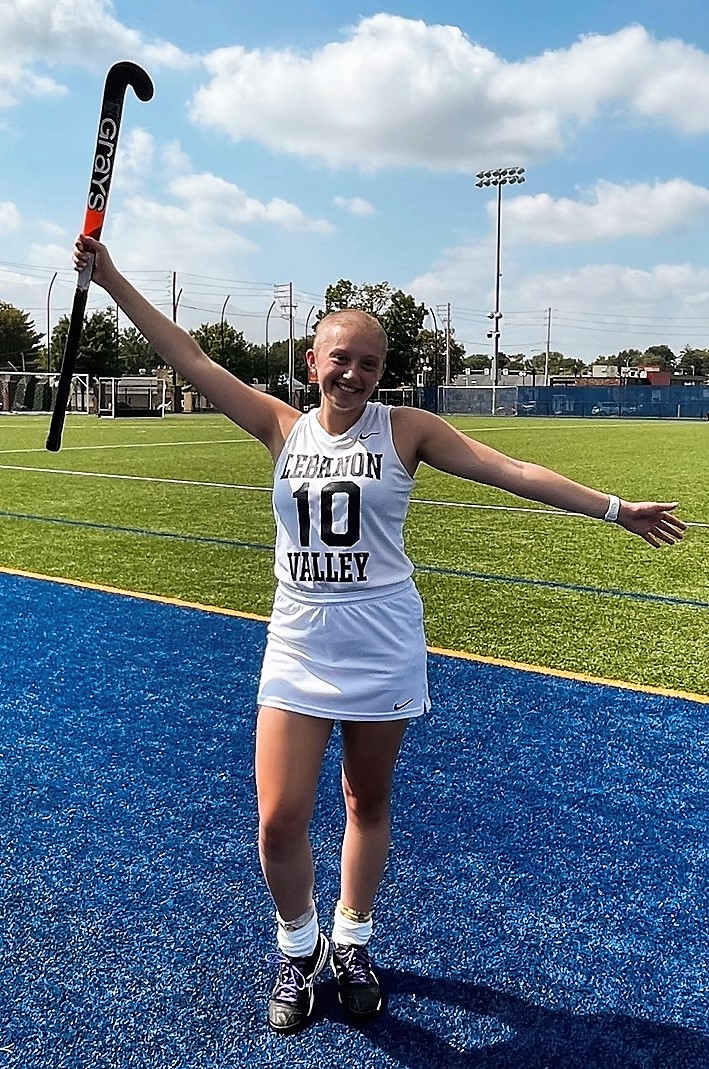 We humans have a limited ability to understand and to comprehend. Where that ability ends is where the realm of God – and faith – begins. Cancer is one of those things that’s difficult to understand. It’s even harder to comprehend when it invades a person who is young.

Cancer is just not right or compassionate or just – all things we relate to God.

Abbie Keath knows cancer, and she’s beginning to understand it. And quite unintentionally, she’s learning a lot about herself during the process.

Keath is 20 years old, and ten months ago she was diagnosed with Hodgkin Lymphoma, a cancer which affects the white cells in blood. A 2019 graduate of Elco High School, Keath recently completed her junior season on the Lebanon Valley College field hockey team.

The good news is that Hodgkin Lymphoma is very treatable and the survival rate, especially for someone Keath’s age, is very, very high. Realistic hope based on the belief in medicine and God.

“I would say that people who knew me before this wouldn’t recognize me now,” said Keath. “I’m not sure if I’ve changed, or if it’s been an unveiling. But I’m definitely different than I was before. “One thing about cancer is that it’s very hard to sum up,” continued Keath. “For everyone, it’s different. For some, it’s emotional and it’s hard on them mentally. For me, I cope emotionally through joking. It’s my way of dealing with it. It’s never going to be easy. The best way to deal with it is to find your coping mechanism, and everyone has a coping mechanism.”

Amid the on-going COVID-19 pandemic, Keath received six months of chemotherapy as a way of combating the cancer. Now, following a recent setback, she is planning to undergo a bone marrow transplant procedure this summer.

“Unfortunately, I recently relapsed,” said Keath. “It was disappointing because I had no reason to think it was going to grow back. It kind of caught me off-guard. The next step is to have an infusion and one of my siblings will likely be the donor. I’m kind of in a waiting period now. The doctors saw the scan in November and they don’t want to start treatment until they are 100 percent sure that it has come back. I’m going to have another scan in two weeks, so right now I’m kind of doing nothing, which is kind of nice. “But the last nine or ten months have definitely been hard,” added Keath. “COVID-19 has made it worse. Because the treatments have made my immune system weak, I’ve had to stay away from people. I’ve really felt isolated. I try to keep my mind as positive as possible. I wasn’t happy to find out about the relapse. But it’s positive. It’s going in the right direction.”

If fighting and overcoming adversity are acquired skills, then Keath learned them through competing in sports.

As a standout at Elco, Keath helped turn the field hockey program around, as the Raiders captured their first Lancaster-Lebanon Section Three championship in 20 years and made a number of District Three playoff appearances. This fall as a junior, Keath appeared in 14 LVC games and notched five goals for the Flying Dutchmen.

“I definitely think I was able to get through it from the experience I gained in competing,” said Keath. “Just the mental toughness that you need, it’s something I learned through sports. I assumed when I started treatment that I was going to be on the field hockey team again, and I was very determined to get back on the field. I worked so hard to get ready. I was even running through the treatments. Four weeks after my last treatment, I played my first game. I had a bunch of goals, and I hit all of them. I was super excited.”

March 9, 2021 started out like any other day for Keath. She had been battling a re-occurring cough to a point where she wanted to get to the bottom of its cause.

“It’s an interesting story,” said Keath. “I had a really bad cough and couldn’t get rid of it. We went all around and nobody was telling us what was going on. They finally called that night. I was on speaker phone and I yelled out, ‘What’s Hodgkin Lymphoma?’ I really didn’t know what it was and when my mom and sister heard me, they started crying. It was pretty much a shock. But I knew I had to carry on the best I could.

“I’ve always been pretty healthy,” Keath added. “Besides the common things kids get, I never had anything like this. It kind of came out of nowhere. I gave myself a day or two to be upset. Then I just told myself, ‘Hey, let’s pick it back up and find out what’s next.'”

Part of what was next was self-examination, self-exploration, self-actualization. When Keath looked deep inside, she liked what she saw, and nowhere was there self-pity to be found.

“I think I’ve found that I’m definitely stronger than I thought I was,” said Keath. “If I’m ever going to face anything else like this in my life, nothing is pretty much going to stop me. For most people, it is scary. I can honestly say I’ve never been scared. I have a lot of faith in the health care system. “That’s true, cancer isn’t fair,” continued Keath. “That goes for anybody, but especially for young people. It doesn’t seem fair, but I rather take this on than have someone I care about take it on, or someone who can’t take it on. I’d rather take on the burden.”

“One of the best things to come out of this is the community aspect of things,” said Keath. “I have been in contact with these amazing girls from all over the country who have cancer. We have talked openly and honestly. Also, the communities of Elco and LVC have shown me so much support and have gone out of their way to help me. It shows people really care.

“I guess I would just want people to know about overcoming and fighting and getting back on the field,” concluded Keath. “I recently joined the track team (at Lebanon Valley), just to show that I can and that I’m capable. I don’t want cancer to take anything that I have.”